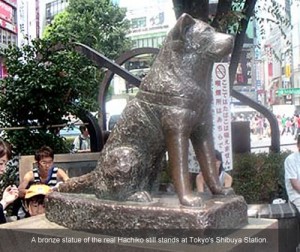 Richard Gere said that just could not stop cyring when he was able to read the script for his new movie, “Hachiko: A Dog’s Story.” This is a remake of a Japanese story about a faithful AKita who waited for his owner everyday at a Tokyo train station ten years after the owner died.

“I was telling people over dinner, and I could only get halfway through the story and I would start crying,” Gere told a news conference at the Rome Film Festival.

The Japanese were just so touched by the loyalty of Hachiko to his owner that they built a statue of the dog at the Shibuya station, which is now a popular rendezvous spot. Hachiko died in 1935.

The film , which is being directed by Lasse Hallstrom has the setting of the story in modern Rhode Island.

“I wasn’t sure if it was just a very sensitive reaction I had that day, so I read it again a few days later and had the same reaction,” said Gere, who plays the professor.

“This is a love story,” he said. “It has nothing to do with gender or species.”

The movie is scheduled to open in the U.S. in December.