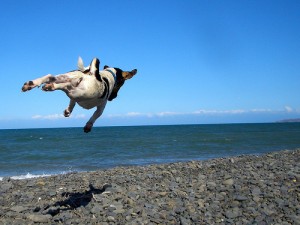 We have always dreamed to fly that’s why there’s the airplane. However, nobody has ever seen a flying dog, except maybe in cartoons.

A storm just sent a dog flying for 20 miles away from his home. Luckily the dog lived through the fall and he was found by Kalman Csutor, 20 miles away from Tamas’ house, the owner of the dog. Csutor was kind enough to bring the dog back to his owners so he opted to contact a local radio station to locate the Tamas.

According to Tamas, as he was dismayed by the damage caused by the storm to his house, he later found out that his dog and the dog house was gone.

The owner of the dog decided to change this pet’s name to Lucky. A very lucky dog indeed.