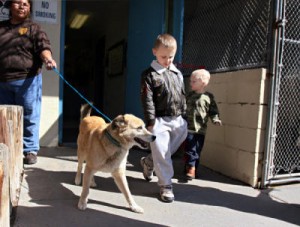 At the emergency room of San Juan Regional Medical Center, a German Shepherd mix with blood on his nose and paw walked in. The dog also had a small puncture wound on one of his rear legs.

The source of blood cannot be determined but the dog did not seem to have been hit by a car. Animal control was called around 9PM Saturday. Animal control officer Robin Loev said, “The irony of the situation is the dog wasn’t doing well. He was drooling and appeared to be sick. The patients were giving him a cup of water when I showed up.”

The dog was taken to the Farmington Animal Shelter where he was vaccinated. Peter Jake, who works at the center said that the dog was doing fine and the injury was minor. He appears to have been bitten my another dog.

Loev said, “He seems very intelligent, very smart and calm and looking like he needed help. I guess he went to the right place.”

The owner saw the picture of Scottie and they are now reunited.